I don’t know why the powers-that-be decided NaNoWriMo should be the same month as Thanksgiving, but I suppose you could make an argument against any month, and they had to pick one of the twelve.

Writing this past week has been a struggle, partly because of the holiday, partly because of a majestic bird, and partly because some unruly bit-part characters (so minor I didn’t even name them at first) announced that I must tell their story, too. Their story matters, but it may mean NaNoWriMo takes up all of December for me, too. (That’s not necessarily a bad thing.)

Another reason I struggled to write is this: on Saturday morning, a rainy, cold day, I stopped to look out at the river and saw the birds gathered as usual to feast on the salmon. Among the gulls and vultures stood a bald eagle. A bald eagle!

I had no camera and so raced home, texted my next-door neighbor to come with me, and off we went to see the eagle. By the time we reached the river, it was raining harder, but the eagle was still there. My friend reached for her phone, and I struggled to get my camera out of a plastic bag I had put it in to keep it dry. A tiny bird in a bush right beside us began to sing an alarm. Between that bird and my crinkly plastic bag, the eagle took off. (I mostly blame the bird, by the way, because it was way louder than my bag.)

As a photographer, you might dream of someday taking an amazing photo of a bald eagle eating a fish that looks something like this. Instead, the photo below was the best I could do that morning:

I was hoping for better than the tail end of the eagle (center of picture) as it flew away.

My master photographer dad tried to make me feel better by reminding me birds are the hardest creatures to photograph. But vultures pose for me all the time down at the river. Even beautiful birds such as herons and egrets will hold still long enough for a photo op.

In the early morning light

And here’s a last remnant of fall, even easier to photograph: 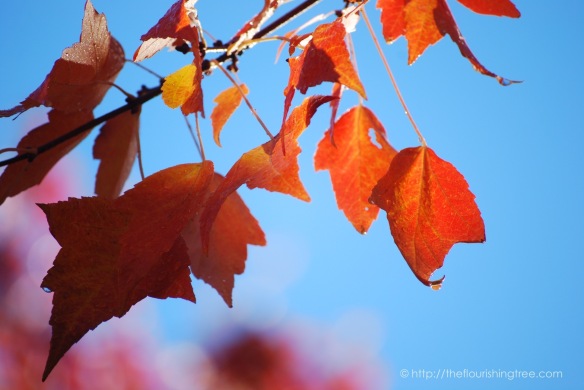 What are you dreaming of as we enter into Advent? I hope your holiday preparations bring you joy and maybe a bald eagle sighting or two.