Three years and three months ago (almost to the day), I stopped along the Blue Ridge Parkway to take this picture. I thought it would be my dog’s last time seeing this beautiful view. She loves to ride in the car, and she loves the mountains—almost as much as I do.

She’ll be fourteen this year, and though she can no longer hop up into the wayback of my car, I’m thrilled to be bringing her home. Would you pray for safe travels for my mom, my dog, and me as we head home?

Plenty of folks may say you can’t go home again, and I understand what they mean. But I went home to North Carolina for a bit of rest a few weeks ago anyway. Here are some snapshots and brief thoughts of my visit home.

It’s hard to balance the need to rest with the desire to catch up with dear friends and family, and so I ended up not doing as much of either as I had hoped. I am slowly realizing that it may always be this way on the visits home, the pull of the heart to spend time with those I love and the pull of the body to rest and soak up the nature of this beautiful place.

The cows came up to the near pasture on my hike through this most favorite of places:

I always love this view but especially when the field is full of cows.

I almost missed my chance at taking this hike, so busy hiking and running and walking in other loved places, but if I hadn’t gone, I would have missed the lilies blooming: END_OF_DOCUMENT_TOKEN_TO_BE_REPLACED

This past Saturday, friends of ours ran a marathon in the mountains. My husband—complete with cow bell and safety vest—volunteered to direct runners (and traffic) at one of the turns in the race. I was in full spectator mode and watched the race from three different spots along the course.

Not all of what I saw thrilled me: for one, the driver of the SUV who blew past my husband and sped toward runners who were in the process of crossing the road to make a turn in the course.

While many races close their courses to vehicular traffic, this particular race does not. It begins on a track and ends on another track, but in between, on curvy mountain roads, there are few places where vehicles aren’t allowed. Signs alert drivers to be aware of runners on the road. And many drivers are more cautious, move over to give runners room, and/or drive slower as they pass the runners. There are a few, though, who don’t give a rip. 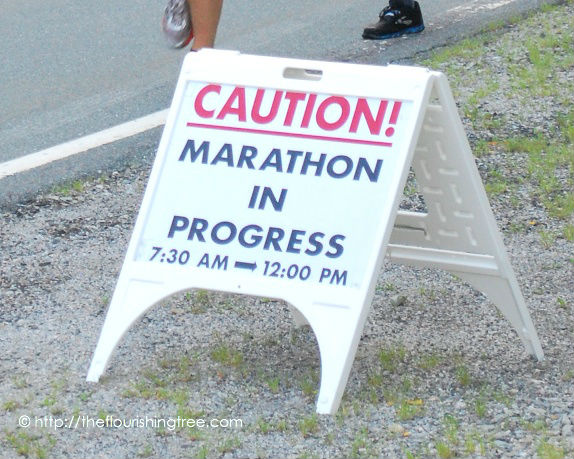 The marathon course includes parts of the Blue Ridge Parkway, and because it cannot be closed during the race, park rangers step up patrols along the part where runners will be. Volunteers at the turns remind runners to run facing traffic, and for the most part, the runners heed these instructions. But there are some places along the course where the runners have to cross over, dodging cars that could be coming from either direction.

The SUV driver was coming from a direction where she would not yet have encountered runners in the road, but she would have passed caution signs warning of runners ahead. She had not been inconvenienced on her route up until the point where my husband stood in the middle of the road. She would have had to slow down for just four miles (a place where the speed limit is between 35 and 45 anyway), not an onerous amount of time to spend being decent to other human beings. She chose not to be inconvenienced, though. Who cared if these runners were tired? Who cared if they were in a zone and not as alert to their surroundings as they might usually be? Who cared if a car zipped by them too closely and too quickly? She clearly didn’t care.

As drivers, we may find it easy to ignore the fact that actual, live human beings are driving and riding in the cars around us. It’s too easy to dehumanize the other drivers around us. And I’m beginning to wonder if the same isn’t happening with some drivers’ (lack of) regard for cyclists and runners.

Other “objects” out on the road are simply obstacles to be dodged, like some great big real-world video game. Except that they’re not just objects, and you can’t earn more points by getting through the course faster or more recklessly. They’re humans. And the ones who aren’t in cars are more vulnerable.

When my friend saw this picture, he told me he had no recollection of running by a tractor. The tractor driver was courteous and safe and, therefore, deserving of a gold star.

Running has changed the way I drive and the way I perceive others out on the road, especially runners and cyclists. I have experienced moments in my running when I was so tired I knew I had to be extra careful with traffic. My mental reaction time had slowed because my brain was so focused on the running. When I’m running, my rule is this: never assume the driver sees me. And now when I’m driving: never assume the runner sees me.

The last few days have brought even more than the usual political vitriol, and with the sadness and frustration and anger I share with many of you over the government shutdown, I thought maybe we should distract ourselves by going on an armchair road trip together.

Let’s not talk about the events that have closed down our national parks. Instead, let’s celebrate them. Will you come along with me as we go to some of my favorites? Those of you who don’t live in the US, you’re invited, too! Maybe this virtual visit will inspire you to plan an actual visit to one of the parks someday … once they’ve reopened.

A view from the top of Mt. Desert, complete with lichen and pink granite 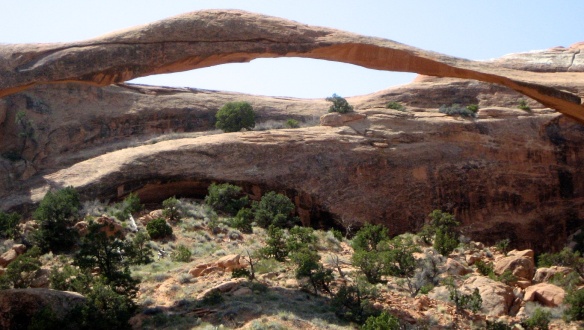 You actually can’t see this arch even when the park is open. It collapsed shortly after our visit, but the rest of the park is still there and is well-worth a visit.

The Blue Ridge Parkway (North Carolina and Virginia)
Because this one’s a road, too, you can still see parts of it during the shutdown. The road itself is open, as are the overlooks. But campgrounds, visitor centers and bathrooms are closed. I don’t know whether trails are closed. 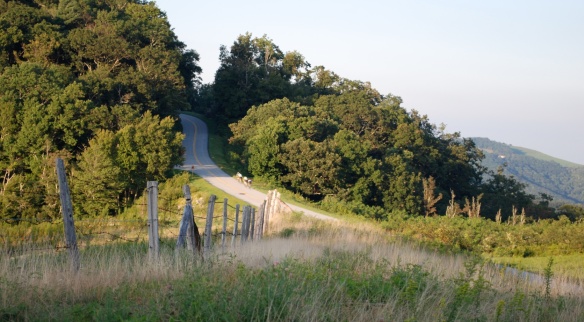 Canyonlands National Park (Utah)
This is the most serene national park I’ve ever visited. Arches National Park is nearby and draws a larger crowd. But this place is phenomenal and raw and beautiful. Oh, and there are no guardrails to protect you from yourself. 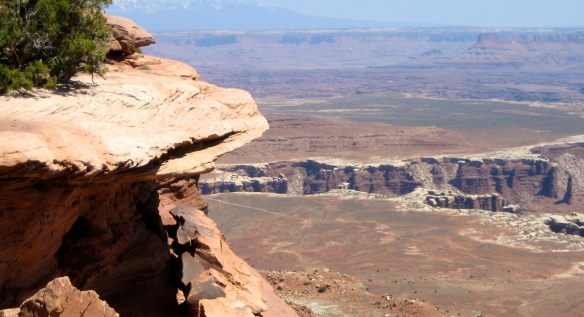 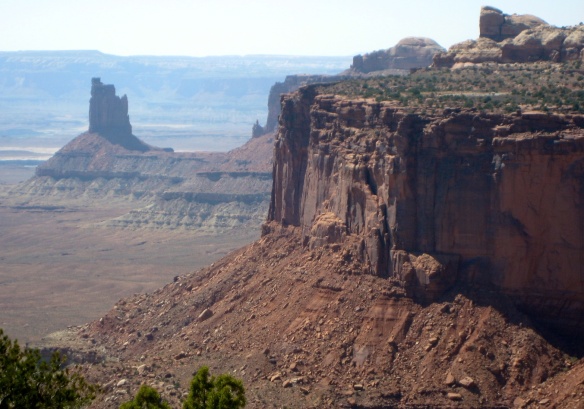 Crater Lake (Oregon)
We visited Crater Lake during the summer. And yes, that’s a huge pile of snow left over from their record-breaking snowfall total that year. It’s closed, too, but not surprisingly, a snow plow operator is one of the few employees still working.

The Grand Canyon (Arizona)
Pictures don’t do the Grand Canyon justice, but I’m including some anyway. Be prepared if you go: it’s the opposite of Canyonlands (see above), but it’s amazing in its, well, … grandeur. You really should go see it. Seriously, put it on your bucket list. 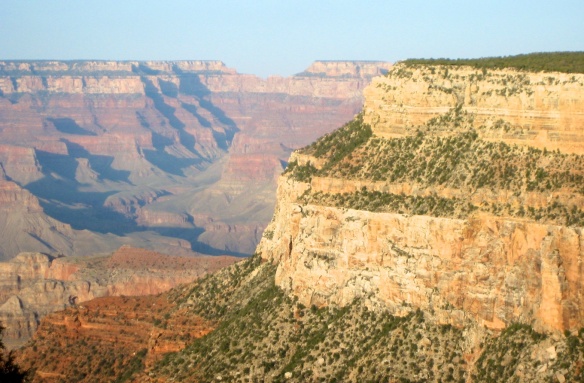 Yosemite National Park (California)
I cannot even begin to convey how fabulous this place is. It is amazing and awesome and stunning and too much to take in. Yesterday marked its 123rd anniversary as a national park. Google even did an animated doodle for it yesterday. I’m trying to ignore the irony of that and the fact that I also got a Yosemite email yesterday morning inviting me to visit. Ahem.

Do you have a favorite national park that you’ve visited? If so, which one? Are there others on your bucket list? What parks would you describe as “must-see” that I haven’t mentioned here? If so, celebrate them by leaving a reply below.