Wow – what a week this has already been. Easter on Sunday. The riveting Boston Marathon on Monday. A final celebration of the Girls on the Run season yesterday. And now today, World Book and Copyright Day.

Easter passed quietly for my husband and me. We celebrated at a sunrise service, a custom he brought to our marriage that I’ve tried to embrace, despite being the opposite of a morning person. We were out of town and celebrated at a lovely stone church where we sang the usual Easter songs and heard a message about the defiance in Jesus’ eyes after the resurrection. He had looked at death, and He triumphed over it.

Meb Keflezighi also had an air of defiance about him at Monday’s Boston Marathon. He turned and saw other competitors coming for him, and he triumphed over them. His victory ended a decades-long drought for Americans winning the Boston Marathon, and it came at the best possible moment for Boston and the United States, as we collectively breathed in the mantra “Boston Strong” and shouted for Meb’s victory (my dog didn’t know what to make of all the jumping up and down and yelling). 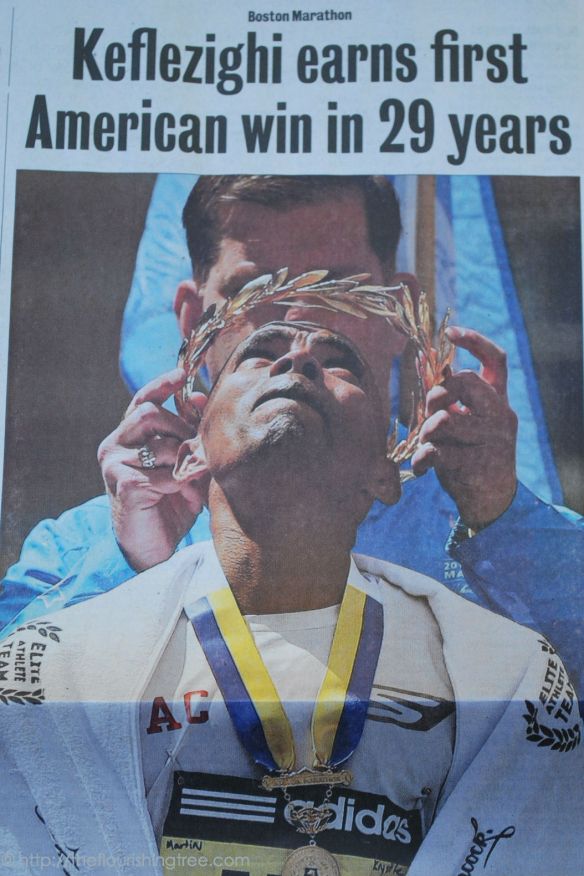 I’ve been a huge Meb fan for years and have celebrated his numerous running accomplishments. My husband and I met him at the 2012 US Olympic Track and Field Trials, when we ran into him in the courtyard of the inn where we were staying. He was waiting to meet friends and was so gracious as we interrupted his reverie.

In the picture from the paper, you can just see the top of his race bib, where he had written two of the four names of victims from the Boston bombers. The other two names were in the bottom corners of the bib. This simple act endeared him to many and tells you just a bit about the heart of this elite athlete. END_OF_DOCUMENT_TOKEN_TO_BE_REPLACED