I’m taking the week off to celebrate the Fourth of July. Because of my dog (and the extreme dryness of California summers), I no longer enjoy fireworks the way I used to. But a good parade never gets old. And neither do celebrations with family and friends.

How do you celebrate patriotism and independence—whether you’re American or claim another country as home?

“USA! USA! USA!” Those chants filled my TV yesterday, as I watched the US team succumb to Belgium in the World Cup round of death. I’ve never been a soccer fan (can’t quite call it football yet), but for some reason, this year, I watched as many of USA’s matches as I could. Maybe it was because of the hilarious commentary from Men in Blazers—a British duo that made me laugh and comprehend and hope for a long Team USA run in this World Cup. They seemed more patriotic about American football than most Americans I know. They made me crave cupcakes, too. (Fortunately, I haven’t caved to that craving yet, as I’m still trying to shed pounds from that cheese-laden trip to Vermont.)

But y’all know by now that soccer isn’t likely to replace my favorite sport: track and field. My husband and I journeyed to Sacramento this past weekend to see the US Track and Field National Championships. This is considered an off year because there are no Olympics or World Championships later in the season. It’s the only year in a four-year cycle that this happens. Nonetheless, we enjoyed attending this championship meet. 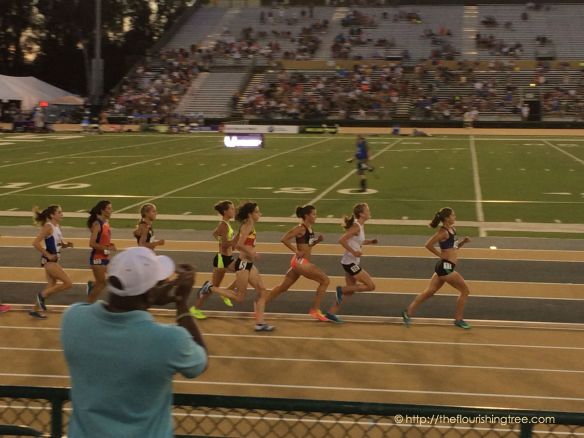 Some of the races are harder to cheer for than others. I mean, how do you cheer for one runner when there are three or four you’d love to see win? The men’s 5,000 was like that for me Friday night. If we had stayed for the men’s 1500, that race would have been even harder for me to pick who to cheer for.

END_OF_DOCUMENT_TOKEN_TO_BE_REPLACED

Happy 4th of July! I know some of my non-US readers won’t be celebrating tomorrow, but for most of my readers, tomorrow is all about red, white and blue; hot dogs, watermelon and potato salad; time with family or friends; and fireworks.

For many of you who run, tomorrow is also about racing hard to earn the aforementioned picnic fare without a guilty conscience. I did my “firecracker” race this past weekend, but I know that – at least here in the South – there are any number of July 4 races before the running calendar goes quiet through the worst heat and humidity of summer.

You know who else is racing hard right now? Our US elite runners. The 2013 US Track and Field Championship happened two weeks ago, and we’re in the process of figuring out which of those championship winners and runners-up will represent the United States in Moscow at the World Championships August 10-18.

It’s not a simple road, but for those who earn a spot on the team, it’s an opportunity of a lifetime to do some patriotic running. My husband and I watched a new show called USATF 36, in which gold medalist Sanya Richards-Ross talks about putting on the USATF tee shirt for tough workouts: “It’s my inspiration … this is why I do it.” She works hard to represent our country well, and wearing the USA Track & Field jersey reminds her that the end result of representing our country is worth the pain and effort.

There are two other athletes, though, that I want to focus on in particular this week. The first is Leo Manzano.

I became a Leo Manzano fan when I saw him run at the 2008 US Olympic Track & Field trials in Eugene, Ore. He runs with heart and with guts. He’s often the shortest guy on the track, but he doesn’t let that hold him back. I’ve forgotten where I read this, but one writer described him as running with “schoolyard abandon.” I can’t tell you often I think of this phrase as I’m out slogging through a run. That expression always makes me smile and makes me try a little harder in my own run. END_OF_DOCUMENT_TOKEN_TO_BE_REPLACED