I grew up in a home where music played constantly. My dad loves classical music and has shelves and shelves of records that he frequently played while I was growing up.

In kindergarten, I started to learn violin and trained to play classically until eleventh grade, at which time I set the violin down with no intention of picking it up again. 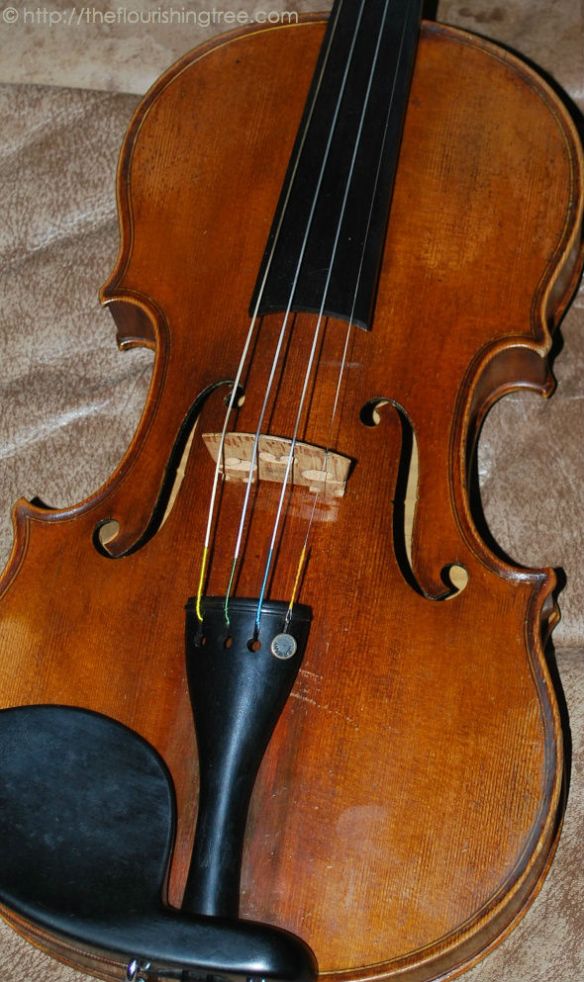 My violin, waiting for me to tune it up and play

My brother played piano and then guitar and then electric bass, a gifted musician who would go on to tour the country for several years with his band. While my dad and violin teachers were educating me about classical music, my brother was passing along his passion for rock and roll.

As an adult, I discovered Irish dance and music. I picked up my violin again, started referring to it as a fiddle (a word that was like nails on a chalkboard in my days of playing classical music), and began to play for fun instead of duty.

My husband’s love of music drew me to him early, and he admits to being smitten when he found I knew of Tift Merritt and her music. On our second date, he took me to a show that introduced me to singer-songwriter Todd Snider. Ours has been a life filled with music ever since.

There’s nothing better than watching talented musicians have fun while they play – and these acts did not disappoint.

A newer group, Della Mae, is one I’ve learned to love over the last two years at MerleFest. They’re a young, all-female bluegrass group, and I enjoy their playing and singing in equal measure. My ears perked up when I heard one of their new songs, Pine Tree:

Pine tree, pine tree, growing from the soil of Galilee,
Don’t be scared now, don’t be slow.
If you don’t go, the roots won’t grow.

I think there’s a sermon tucked away in that chorus. You can listen to a snippet of this song and others off the group’s upcoming record release.

Singing trees
Della Mae’s song was not the only time music and trees connected with one another at the festival. 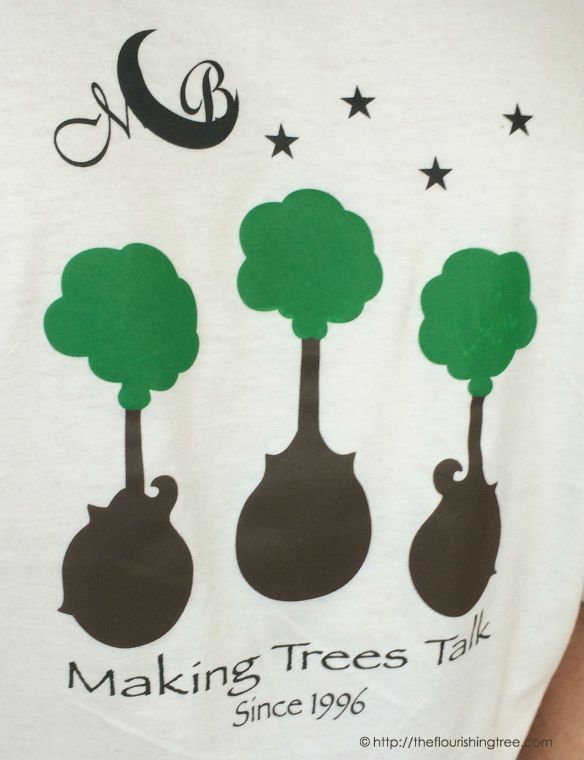 I love the message on the back of this t-shirt!

This shirt made me wonder if at least some music fans also have a deeper appreciation for nature because we know what goes into making the instruments sound so beautiful and what we lose when whole species of trees die out.

Take the violin for instance. Each violin likely consists of wood from at least eight different trees (among them spruce, maple, poplar, spruce, willow, ebony, rosewood, boxwood, mahogany). The pernambuco tree once made up most Western violin bows, but now, because the tree is endangered, violin makers are searching for other woods and synthetic options to make great bows.

Even the rosin that enables the bow to draw sound from the violin’s strings comes from tree sap.

The scroll, pegs and neck of my violin — all made of wood 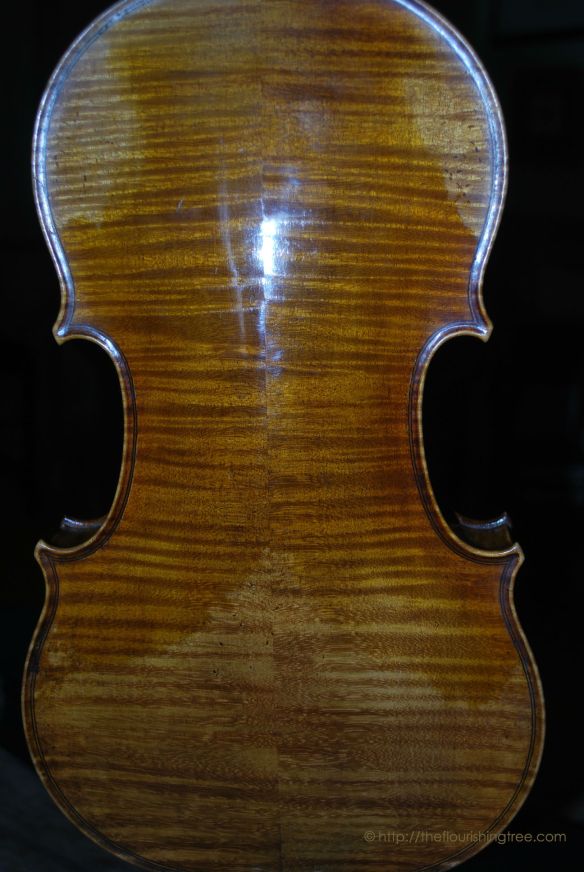 I’m partial to my own violin, I know, but I think its back is simply beautiful.

Without trees and the gifts they provide, what would become of the violins, mandolins, guitars, banjos, cellos, dobros and basses that make such beautiful music?

Nature has its own wonderful music, but I’m grateful for the music it enables humans to create, too. Today’s weather may not be serene and calm where you are (it’s getting ready to storm again where I am), but the next time you find yourself outside on a peaceful day, I hope you’ll think of the message from another t-shirt I found at the festival:

Will you listen? And will you make the trees sing?