You may recall I was traveling across the country—from California to Alabama—to attend family celebrations the last two and a half weeks. The two celebrations were too far apart to consider staying for the whole time, and so that meant a lot of back and forth.

Direct flights weren’t an option, and so both weeks, I traveled through Atlanta. And both weeks, I spent an unexpected night in Atlanta.

Misfortune struck on my way back home from the first trip, with bad weather delaying my trip into Atlanta, causing me to miss my connection. In retrospect, that overnight stay wasn’t particularly bad. Yes, it involved a migraine (my first in years), my dinner dropping out of the bottom of a soggy bag and a suitcase I would not see again until home. But the stay also included a hotel room, a clean bed and a hot shower.

I would not be so fortunate on my next trip through Atlanta. Last week, I spent the night in the airport. After weather delayed my flight, we boarded at midnight and then the pilot timed out before we could take off. By then, hotels were full, and I and a few thousand of my new best friends would be spending the night in the Atlanta terminals.

Here are a few tips, should you find yourself in a similar unfortunate position someday.

If it’s late at night but vendors are still open, get food and something to drink. Shops and restaurants will not stay open all night, and they may or may not reopen before your flight leaves in the morning. There are a lot of food options in Atlanta, and the directory can point you to another concourse with completely different choices. A few of my favorites include: 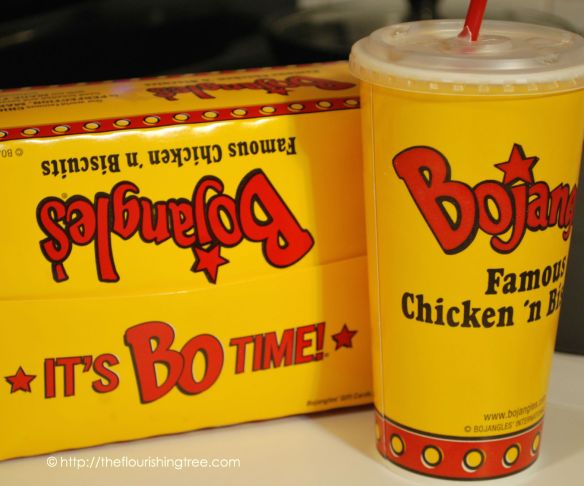 Get a blanket as quickly as possible. There will be people in front of you who insist they need five blankets. And it’s not because they have four children with them. The terminal is cold and will only get colder through the night. If you don’t get a blanket at first, continue checking by the “help” areas. Delta was doing blanket laundry throughout the night, and every now and then, a large box of clean, wrapped blankets would magically appear. If the shops are still open, you may also consider one of those travel pillows you’ve been putting off buying. The terminal seats may be cushioned, but they are nowhere near pillow soft.

Try to find three seats together near a charging station. This will kill two birds with one stone. You’ll be able to stretch out. (Please don’t be a hog and take four seats unless you are really, really tall or are traveling with children.) You’ll also be able to plug in your phone to charge. If you have earplugs/headphones, go ahead and use them. Atlanta is quite possibly the loudest airport in the world, and it does not sleep at night. If you have music on your phone, play it to drown out the public address system that will never, ever stop or get quieter all night long. I also recommend covering your face with a spare article of clothing, if you have your bag with you. This is not so you will suffocate, but it will help block the obnoxious overhead lights that will never, ever dim all night long.

Be prepared to move—even to a different terminal—to find a darker, quieter corner away from overhead speakers, the worst of the florescent lights and those inevitable jerks who feel the need to carry on loud phone conversations while walking among a sea of people clearly trying to sleep. Try really hard not to wish scurvy or death on these people. They’re having a bad night, too. You may have to repeat this attempt several times before you can stop wishing scurvy or death or, at the very least, sudden-onset laryngitis on them.

The family restroom may be one of the quietest places you’ll find to brush your teeth and wash your face. It’s also easier to change into fresh clothes in those than in the main bathrooms. Just don’t stay locked in there too long. Others may be waiting to do the same.

Be kind to the workers. The Atlanta airport never sleeps, and there are workers who still have jobs to do, even when the airport turns into a “hostel” for the night. If there is a man sweeping the carpet for an hour near where you’re trying to sleep, get up and go find another area to try to sleep. He’s just trying to clean the floor for the next folks who will have to sleep on it.

You can travel between concourses, but it may take longer at night. The trains stop running at some point. So do many of the escalators. Maintenance on escalators and moving walkways may happen at night. If you want to get from one terminal to another, take the elevator (a nice warm, dimly lit, quiet piece of heaven) to the train level and then walk to the other concourses from there.

If you can’t sleep, go learn something. Several areas between concourses have exhibits. One has an exhibit on the history of Atlanta (I think between B and C concourses). If you don’t feel like walking to read each panel, ride on the moving walkway. When you reach the end, go back on the opposite walkway to read the panels on the other side. Repeat as desired. The area between A and T has a wonderful exhibit of African sculptures. This was my favorite place to linger: 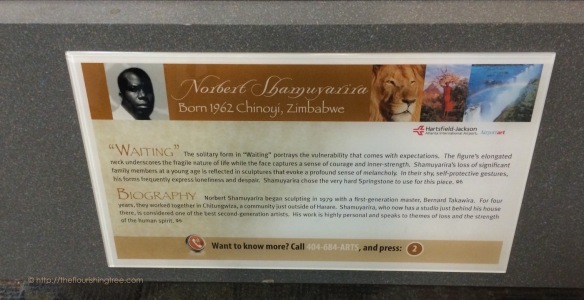 It’s pretty cool that there’s even a phone number where you can learn more, almost like being in a real museum. 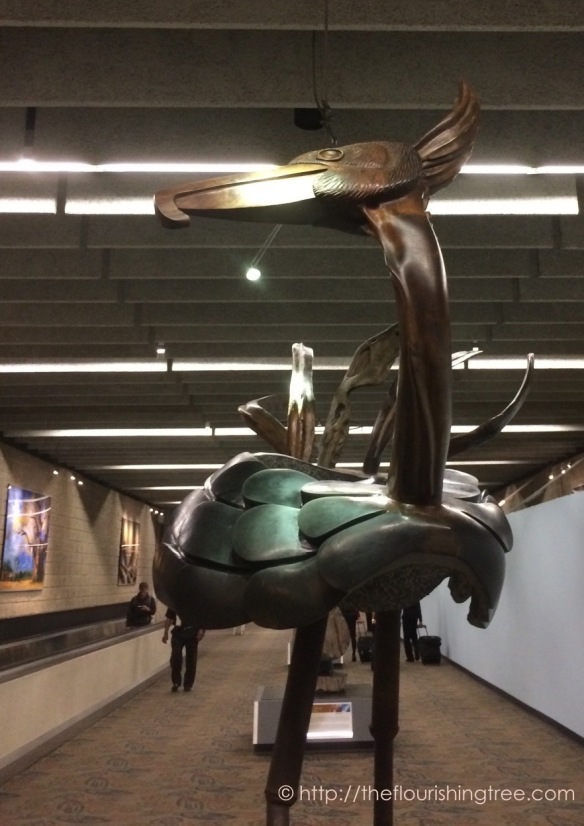 A favorite sculpture. I envied this bird for its wings. With wings, I’d never have to be stuck in Atlanta overnight again.

Count your blessings. Know that even though it is miserable and uncomfortable, sleeping in the Atlanta airport is not the worst thing that could happen to you. The CNN newsreel loop that played all night included the woman whose sister called her from the washed-away house in the Houston floods to say “Please tell Mom and Dad I love them. And I love you.” I cannot even imagine the night she had.

Have you ever been stuck overnight at an airport? I’d love for you to share your stories and tips in the comments below.