Spoiler alert: This post contains information that gives away the Downton Abbey season 3 finale, along with other plot points of this latest season. If you’re trying to catch up on the craze and don’t want to know what happens, then stop reading (but come back to this post after you’ve watched the season finale because I want to know your reaction).

I was late to the Downton Abbey party, and ended up watching the first two seasons through Netflix. I got hooked, like so many of my friends who loved to talk about Mary and Matthew and evil O’Brien and Thomas (the conniving servants we all love to hate). And so I was excited about actually watching a season along with my friends for a change and being able to talk with them about the developments as the season progressed.

Most Sunday nights of late, one of my friends has posted on Facebook his favorite quote of the evening from the Dowager Countess (played by one of my all-time favorite actresses Maggie Smith). I usually recorded the show, and so I had to avoid Monday-morning commentary about the show so I wouldn’t learn any of the plot before watching it. But I have enjoyed the banter back and forth about the show and its characters this season.

You know a show has hit it big when there are t-shirts. “Free John Bates” and “Keep Calm and Ring Carson to Bring Tea” are just two that I came across in a catalog late last year. You can even buy a t-shirt that proclaims your affinity for one of the sisters: “I’m a Mary,” “I’m an Edith,” or “I’m a Sybil.”

You can also rate a show’s popularity by the number of spoofs it inspires. Jimmy Fallon has done spoofs on his late night show, Saturday Night Live spoofed the show, and even Sesame Street has gotten in on the act:

But this Sunday was my last episode. Writer Julian Fellowes has gone too far and killed not only a beloved character on the show but also managed to kill my desire to keep watching.

On Saturday, The Miami Herald published an article about the season finale suggesting that only about a half dozen viewers didn’t already know about the shocking finale, but I knew there were more. I know at least five people personally who had no idea what was coming. Still reeling from a horrific death of one of my favorites on the show just three weeks ago, I didn’t want to believe that Fellowes would strike again so soon. But he did.

Let’s talk about the body count surrounding pregnancies on the show: Lady Grantham (Cora) has a miscarriage in Season 1, losing the last hope of a son and close heir for Lord and Lady Grantham. Maid Edith gives birth to an illegitimate child, whose father was a soldier recuperating at Downton Abbey toward the end of World War I. The soldier/father dies, (though very few viewers mind) and, in this season, a now-tarnished Edith must give up the child to the rich grandparents to raise. Lady Sybil (the youngest and kindest of the three Crawley sisters) and chauffeur-husband Tom return to Downton where Sybil gives birth to a daughter before dying later that night in a heart-wrenching scene. And now, Matthew, as he was driving home on a beautiful sunlit country road, filled with joy at the birth of his son … well, did he have to end up under his overturned car? For those of you not counting, that’s four pregnancies and four deaths.

Mr. Fellowes – you went too far this time. Why must someone always die when there’s a pregnancy on the show?

I no longer want to know if Anna and Mr. Bates will become parents after Bates has finally gotten out of prison. I’m afraid if Anna ever becomes pregnant, a flock of crazed storks may attack her and Bates while they’re celebrating with over a sweet picnic. I don’t want to know what happens to O’Brien when somebody finally decides to pick up her story with “Her Ladyship’s soap.” And I don’t want to know if Carson and Mrs. Hughes ever get to live happily ever after. Because I don’t think Fellowes has it in him to let any single character live happily ever after.

Facebook has been relatively quiet about Downton Abbey this week, maybe letting latecomers watch the episodes they’ve missed, or perhaps trying to process their feelings about how the season ended. But one of my friends referred to the show on Facebook as “Downer Abbey,” and that search term on Google turned up more than 8.5 million hits earlier today.

Another friend asked if anyone else was tired of people having babies and then dying on the show, and so I know I’m not alone in my disenchantment with the show. One of her friends’ responses to her question did make me laugh, though, suggesting that PBS could have its shortest, most successful pledge drive ever by threatening to keep killing off beloved Downton characters until enough money comes in.

I watch very little television, but even I know that there isn’t just one way out of an actor or actress wanting to leave a show. As a friend said at lunch today as we talked about it, “They even replaced Dumbledore, and he had really died!” (That’s a reference to the Harry Potter movies having to replace Richard Harris with Michael Gambon starting with the third movie in the series after Harris died.)

I’m not expecting a Dr. Who character regeneration every time an actor wants out of the show, but it’s simply not creative to kill every character who is played by somebody who wants to move on to greener pastures. (Are there even greener pastures than Downton Abbey, right now?)

So while I understand the bind Fellowes was in with two of his actors wanting to move on, I’m not up for another season filled with tragedy. I’m no longer willing to go along with the emotional manipulation of the show. Real life has too much tragedy of its own, and that’s what I hope to escape when I sit down to watch television on a Sunday night.

Guess I’ll go back to reading on Sunday nights. And if I need to keep calm and ring for tea, I’ll fix my own cup. 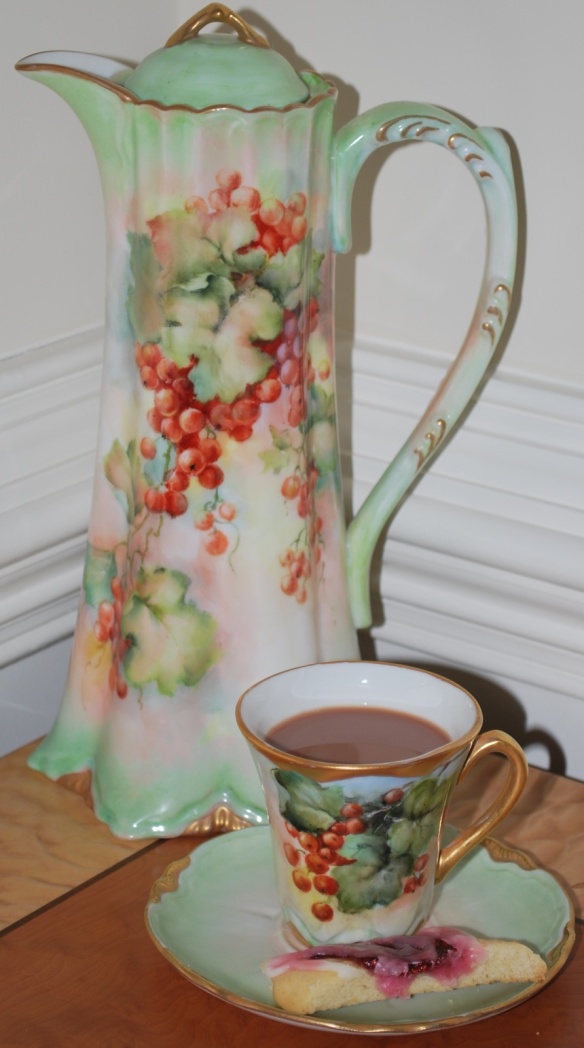 Carson would know this is a chocolate set, but it’s the closest I have to a fancy tea set. Knowing my preference for hot chocolate, my mother painted this set for me years ago.

How about you? Are you a Downton Abbey fan or someone who can’t see what all the fuss is about? If you’re a fan, did this season’s finale change your opinion about the show?

19 thoughts on “Why I’m done with Downton Abbey”