A few hours after last week’s post went live, I got my first glimpse of the fledgling owl peeking out of the owl box. I went to bed wondering when it might leave its home for the first time. I didn’t have long to wonder.

I woke up the next morning, said a quick prayer for the fledgling to be safe, and got out of bed to start my day. As soon as I saw the silhouette against the screen, I knew our owlet had left home.

It was still mostly dark outside, but I could see the shape flutter up and down the screen and finally hop along the ground at the base of our house. Shortly afterward, it hopped over into some bushes by our back fence. That’s when the drama began.

A California scrub-jay, aka “the fiend”

A California scrub-jay hovered around the fence, calling in shrill complaint, announcing the presence of the baby owl. Then I saw it: the neighbor’s cat, still as ice on the most frozen winter day, stalking the owlet from atop the fence. It was more than I could stand. I went outside and chased the cat back into its own yard. The jay flew away.

A few hours later, not sure where the owlet might have gone, I saw a hummingbird hovering near the ground. Then the jay returned, along with its noisy shriek. It pecked at something I couldn’t see. Both the hummingbird and the jay were excited about the owlet.

The owlet in a dangerous, open spot

I went outside and gave the owlet a lecture about sitting out in the open where cats and jays and hummingbirds alike could pester it. This was no place to test its wings or take a nap.

A short time later, I spotted it back in the bushes.

Is this a better spot for a nap?

The jay continued to visit throughout the day. Perhaps it has a nest nearby and was trying to protect it? Or maybe it thought the owlet would be a fun victim? 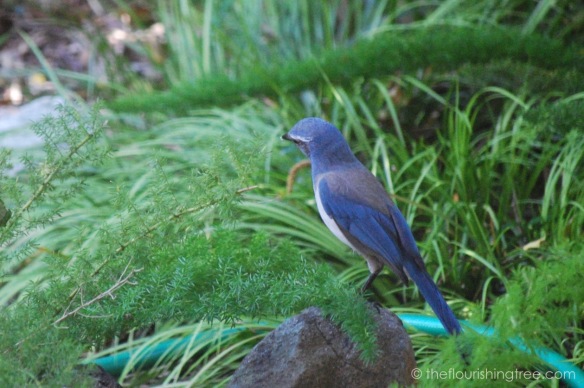 Jays are some of my least favorite birds. As a child, I detested blue jays from the moment my mother told me they sometimes eat other birds’ eggs and nestlings. The knowledge of their eating habits was more than my tender heart could stand. A lifelong enmity began then and has remained steadfast to this day.

Owls, in contrast, have become one of my favorite birds, especially the Western screech-owls that choose to nest in the box on our house. (We won’t tell my younger self what they eat.) I know the owls aren’t mine, and I know they can’t all survive, but I feel protective of the fledglings from our box, nonetheless. 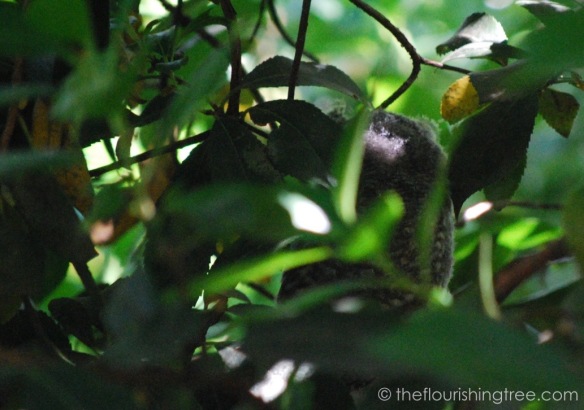 My husband and I had plans to be away for Memorial Day weekend, and so we knew the fledgling would be on its own after that first precarious day out of its box. I asked the neighbors to keep their cat inside for a few days to give our owlet a chance. I could make no similar request of the jays.

Knowing I would likely never see it again after its first day out of the nest, I had to hope it would grow strong and be able to defend itself against the many threats it faced. I had to hope its parents would come to its aid, if need be. I have to hope it will grow into a wise, old owl someday.

2 thoughts on “The fledgling, the feline, and the fiend”