Men may dam it and say that they have made a lake, but it will still be a river. It will keep its nature and bide its time, like a caged animal alert for the slightest opening.

I bought a rain gauge Friday and put it in the ground. From Friday to Monday afternoon, the gauge showed 3.3 inches of rain. There was another round yesterday, and my rain gauge showed another 3.6 inches since Monday. It’s quite possible I haven’t set the gauge in a good place, and we had high winds yesterday that could have blown extra water from plants into the gauge. But we’ve had a lot more water around here than usual.

This area typically gets about 20 inches of rain in a year—measured for some reason from October 1 through September 30—and last year (a drought year), we got just 16 inches of rain for the year.

Last week, as the storm approached, friends on social media began talking about stocking up on storm supplies: batteries, canned food, even MREs. The newspaper offered suggestions about where to get sandbags. I asked my husband if we, in doing none of those things, were perhaps a little too calm about what was coming, and he reminded me we’re high enough above the river that we’d be okay.

In the past few days, I’ve seen young coyotes and deer running hard for high ground, looking bewildered by this turn of events. Ducks have new ponds to swim in. The county has closed off parks near the river. And the river rages.

In some rare sunny moments these last few days—before and after the storm—I headed out with my camera to the river and a nearby dam. 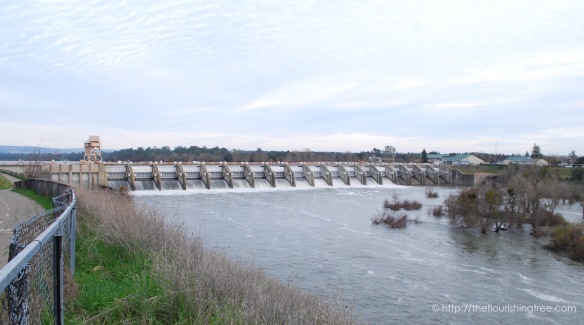 Water officials began releasing water from the dam in advance of the storm.

On Friday, 14 of the 18 floodgates were open, as county and state officials prepared for the storm.

All 18 gates were open when I ventured out during a lull on Monday:

Monday’s view with all gates open 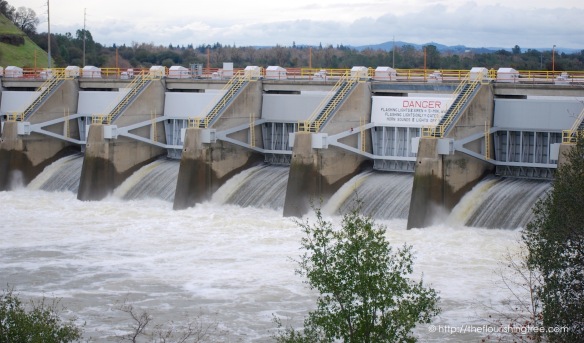 A closer view on Monday

Monday, I spotted some fishermen along the river just down from the dam. 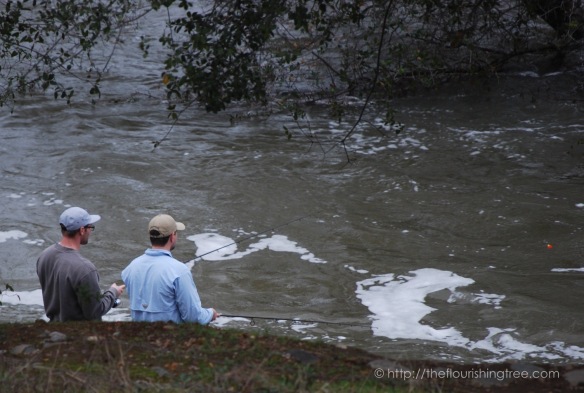 A good day for fishing?

I also saw a foolhardy kayaker. 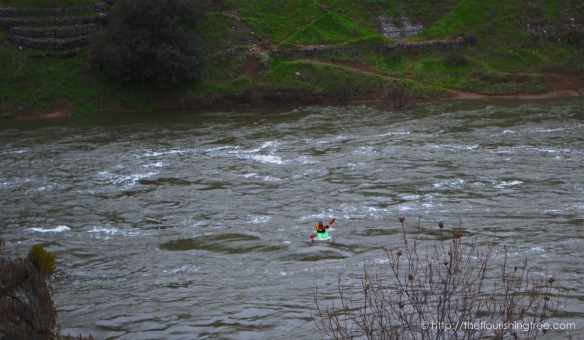 Compare the stone retaining “terrace” in the upper right of the photo with the kayaker to the way that area looked on Friday: 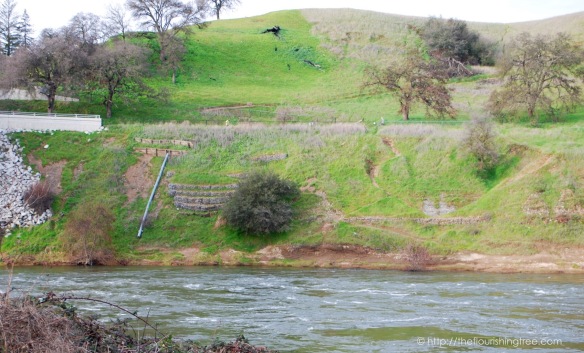 I photographed the fish hatchery posts where they install the fish gates each salmon season. The gates are down, but the cement posts are a permanent fixture in the river. 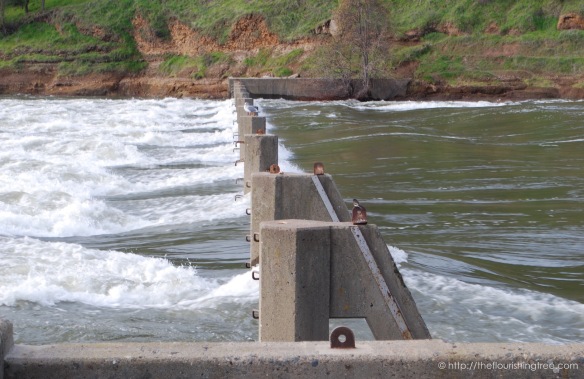 Last Friday’s view from the fish hatchery (Note the cement wall at the bottom of this photo.)

By Monday, the river was flowing right over the tops of the posts: 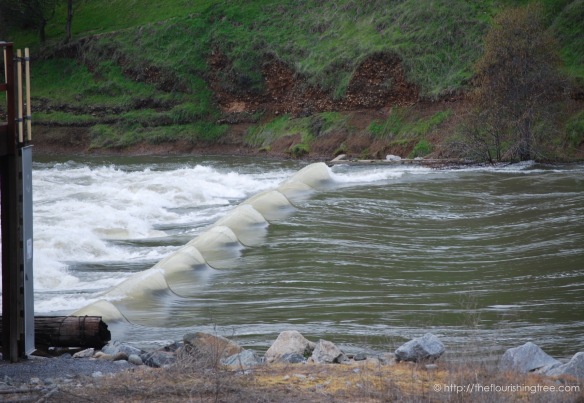 And this was the raging river at the same point today: 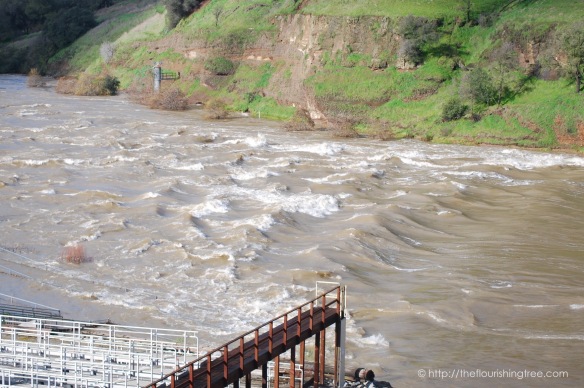 Today’s view near the hatchery

What struck me Monday was the flooding of a spot where I had stood to take a picture of the cement posts on Friday: 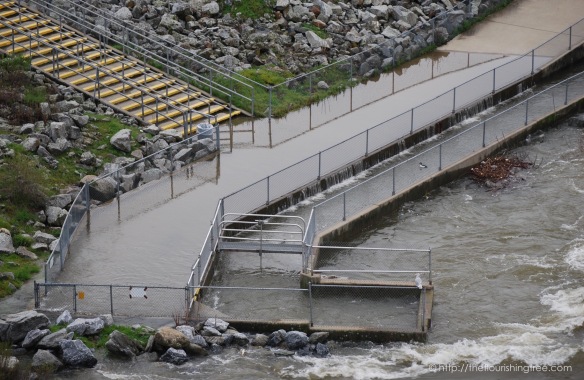 I was standing between the two chain link fences in the corner where you see a white sign on the fence. I had propped my camera on the fence, and at the bottom of Friday’s photo, you can see the cement wall that’s nearly water level (look for the sea gull, and then look down). You can also see water covering the bottom few stairs. Notice the duck taking refuge in the fish ladder (middle right of picture) to get away from the raging river?

Today’s view was even more startling: 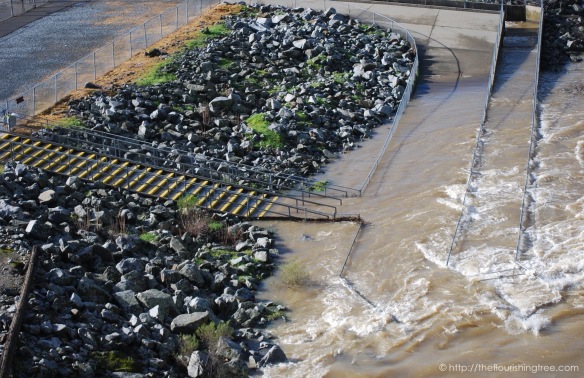 There’s a beauty in seeing something so powerful, and I have been spellbound these last few days watching a phenomenon I’ve never witnessed before firsthand. I don’t know if you can see it in the photo below, but the water at the bottom left of the picture is sparkling, almost jewel-like in the sun. I was happy to watch it from a safe distance. 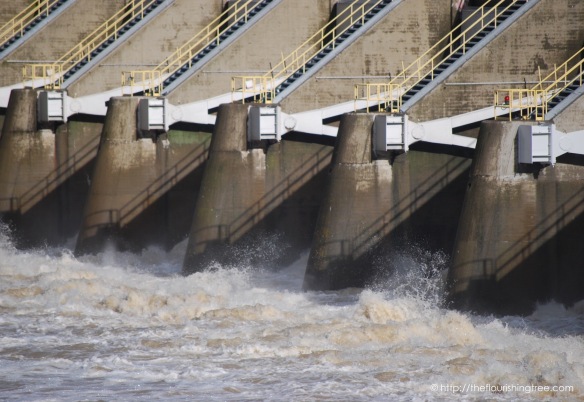 Today’s view by the dam, with muddy, powerful water

What I saw today left me almost speechless. The “caged animal,” as Berry describes, feels exactly like what I was witnessing.

Water experts keep cautioning those who want to celebrate this storm as the end of the drought. They say the rains could end at any time. We’ve had a lot of rain since October, though, and if nothing else, it has made many of us around here optimistic that this year will be different, that this year won’t mean year six of drought.

This land of drought turning into a place where the river rages reminds me of one of my favorite of God’s promises in Isaiah:

I will open rivers in high places, and fountains in the midst of the valleys: I will make the wilderness a pool of water, and the dry land springs of water. — Isaiah 41:18

And while I’m grateful for the rain, I wouldn’t mind if the rain spread itself out over the next several months instead of coming all at once. It seems a bit odd to thank God for answering my incessant rain prayers from last summer while also chanting the childhood rhyme: “Rain, rain, go away. Come again some other day.” I’m sure God understands.

6 thoughts on “A raging river”