Late last year, hopped up on post-race endorphins, my husband and I registered for a half marathon at the end of August, a race that would be at the perfect point in my training for a December marathon. “It’ll be great!” we told each other.

My body wasn’t on board with the training schedule, though. Thanks to a nagging injury, I spent the last six weeks in a boot and am just now getting back on the road to recovery. I’ve lost a lot of strength and a lot of flexibility. And I’ve lost both the August half marathon and the December marathon.

My husband and I had been anticipating the weekend getaway, though, and cheering him on would be fun, if bittersweet. Our hotel was near the start/finish area of the race, and I decided to walk part of the course, scream like crazy when he ran by, and take photos along the way. It was a beautiful, chilly morning, and I enjoyed the slow walk.

A few tears threatened to fall, though, when I saw the pace group near where I should/would have been at that point in the race.

When I arrived at the park that served as the race’s start/finish area, runners were queuing up for the 5K and 10K races. I walked around and took pictures to distract myself. Crouching carefully so as not to catch the spot above my knee the boot had already bruised, I took a picture of the drop bag area.

As I focused on taking the photo, I could hear someone approaching.

“Ohhhhh! The boot! The boot!” A young man looked toward me, exclaiming to his friend. Catching me looking his way, he said, “I’m so sorry. I just got out of a boot. Ohhhh! The terrible memories.”

“I’m sorry to bring up bad memories for you,” I said. We commiserated for a moment before he headed off to start his race. I walked in the other direction toward the park’s community garden (because flowers = great distraction).

Pale purple is one of my favorite colors for a rose.

Morning glories for a glorious morning

From the garden, I decided to go over to the starting line to watch the next race start. I didn’t stay long. Drat those tears trying to well up again.

All those lucky people lining up for their race

As I wandered back to the hotel, I encountered the chirpiest photographer I’ve ever seen at a race. “Wave your hands!” “Run over here!” She called out instructions to each pack of runners. I’m sure she was trying to get the best pictures, but I’ve never heard such a bossy photographer in a race before. 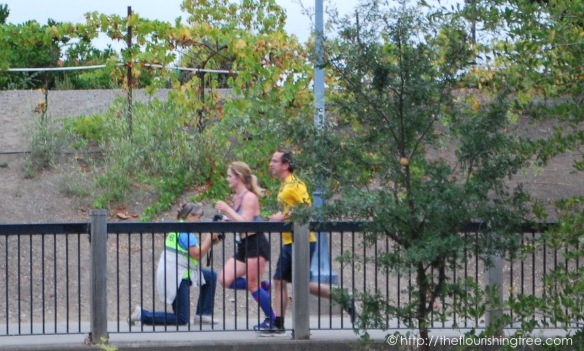 I distracted myself the rest of the way to the hotel with art and feral cats and even more gardens.

A feral kitty watched me from a safe distance on the hotel grounds. 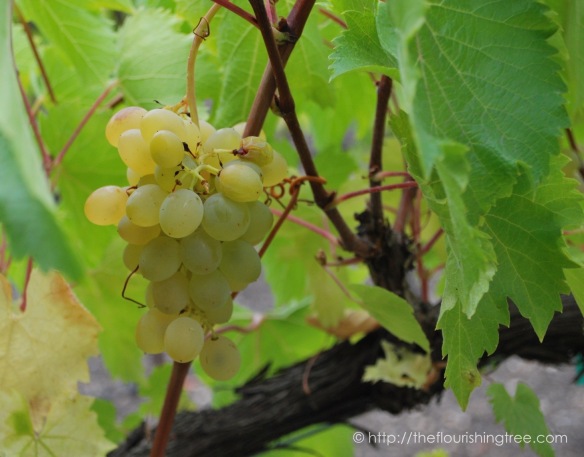 A tiny vineyard reminded me I was in the heart of wine country.

All that wandering around filled up the time until I needed to head back to see my husband finish. I watched the sea of runners flow toward the line: 5K walkers, 10K runners, half marathoners. Then I spotted my runner. He gave me a thumbs-up as he ran by, and I headed over to meet him in the finish area.

He handed me his water and finisher’s medal so he could break a piece of watermelon in half to finish it more easily.

I looked at the medal: a fun double-spinner medal. 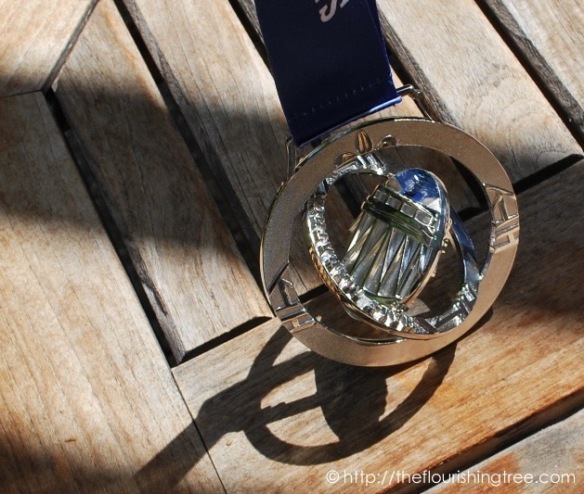 It’s not as beautiful as some of the finisher’s medals I have, but holding it in my hands brought the wave of emotion that had threatened all morning. Tears spilled over, brief but earnest, a moment to let a relief valve open.

How can I explain this feeling to non-runners? Race day is the reward for all the hard training work, all those mornings of dragging out of bed early. The collective steps carry you to a day of comrades sharing the journey, of cowbells and photographers and funny signs lying, “You’re almost there!” even when you have miles to go. The sense of accomplishment. The knowledge of having tackled and succeeded. These are the things I missed, the moments I lost because of injury.

My very sweet, very smart husband knew I would need some cheering up. During the race, he ran by a garden open to the public and knew taking me there would bring me joy. He was right. I’ll take you there in next week’s post.

Healing is happening, and I’m grateful for that and thankful for the hope of more half marathons in my future. The half marathon is my favorite distance to race, not because I’m particularly good at them but because the distance keeps my training honest without becoming all-consuming like marathon training.

For now, I’m happy simply to have shed the boot. What boots are weighing you down? And what adventures are you anticipating after you’ve gotten rid of whatever your boot may be? What joys can you find in the meantime?