My friend Adam says, “All snakes are poisonous when you’re running.” He knows it’s not true, but it sure feels true in the moment you see one slithering across your path.

I was maybe a minute into my first leg of the Reno-Tahoe Odyssey this weekend when a black and pale yellow snake slithered across my path. It was not a small snake. My usual “turn and run the other way” technique for snake avoidance wouldn’t work here. I couldn’t turn around without letting my team down. I couldn’t veer off the path to miss it because knee-high bushes (excellent hiding places for even more snakes) grew along both sides. I had to hurdle it and keep going.

I suppose all interesting odysseys must involve scary beasties and other obstacles.

Before the start, I was anxious about the other obstacles we would face, primarily heat and altitude. Snakes hadn’t really crossed my mind until one crossed my path. On my way to the start, I had even walked by a homeless person trying to shoo a small snake away from where he was sitting. The whole snake thing barely registered then. 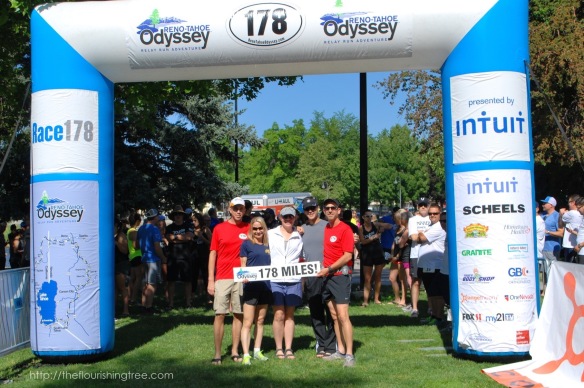 At the end of my first leg. That’s a relieved/happy/proud smile on my face.

After my snake encounter, the heat became the primary obstacle. Not getting lost was a secondary concern.

As I came in to the exchange point, I was relieved to be at the end of my first leg. Nothing prepared me for the joy of handing the baton off to Gen for her first-ever relay leg or of being surrounded by enthusiastic teammates. I had conquered snake and heat, and I had even passed two other runners along the way.

My second leg came not too long after. Most of the other teams’ runners were running that leg as their first, and they were fresher and faster than I was. As I ran (and walked), I tried to enjoy the beautiful surroundings. Trees and little pockets of shade on an otherwise sun-covered road became my running markers. I will run to that little patch of shade and then walk. I will walk until that tree and then start running again.

The views were unbeatable.

At the end of that hot leg, my reward was dipping my burning feet in the Truckee River. Ahhhhhhhhh. There is nothing better than a river full of snow melt to revive a weary runner. 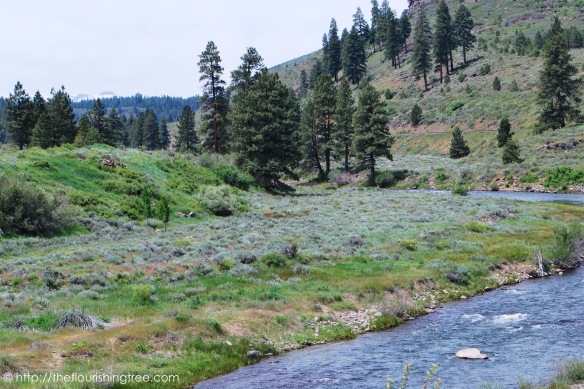 Leaving that leg, I had a long wait at a railroad crossing. I knew I was in trouble when I saw four engines at the front. But I wasn’t in a hurry, and I took the opportunity to get out of the car, stretch my legs and snap a few pictures. 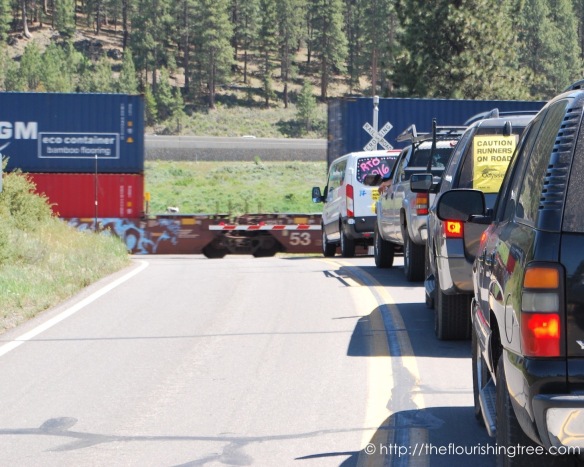 Team vans line up to wait for the train.

Because of logistics and demands back home, I skipped the hard overnight parts of the race, and a friend drove up to take the extra burden off the other four runners on our team. I headed back early the next day for my final leg: another mostly shadeless, hot run. 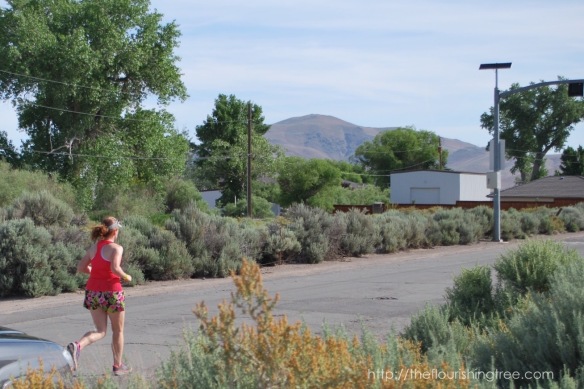 At the start of my final leg 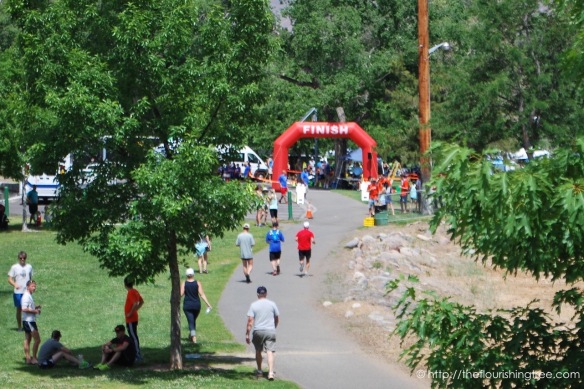 While I was happy each time I finished a leg, I still felt a sense of incompleteness. It wasn’t until I watched Mike run across the finish line that I felt the full measure of what we had accomplished together. Two states on our feet. 178 miles. Several thousand feet of elevation change. As the race website says, “a long wandering.” Strangers now bonded as friends. An accomplishment for life.

Earlier this week, my mom asked what my favorite race is that I’ve ever run. It’s a great question, but I don’t have an answer for it.

Plenty of reasons could put a race on my favorite list: beautiful scenery, easy course, friendly volunteers, the coolest race t-shirt ever (I’m looking at you Pink Buffalo Stampede), a PR, an age group award, a new distance.

For me, though, the races that stand out most are the ones that challenged me to learn something about myself. Like the time I didn’t slow down but instead pressed on even faster. Or that other time I had to eat watermelon along the way just to finish. Or the first race as a Girls on the Run coach. Or the race where I recognized the signs of heat exhaustion early enough to fight it off. Or the time I hurdled a snake so I wouldn’t let other runners down.

Running is an odyssey. And it’s the beasties and other obstacles along the way, as well as what you learn about yourself, that make the best racing memories and tales.

2 thoughts on “A new odyssey”