“Six of 18,” the cyclist said to me. I nodded, knowing he meant the number of spillways open at the dam we had both stopped to photograph. Until last week, three had been the most spillways I’d ever seen open. When I passed by the dam earlier this week, 10 spillways were open and pouring water into the river. 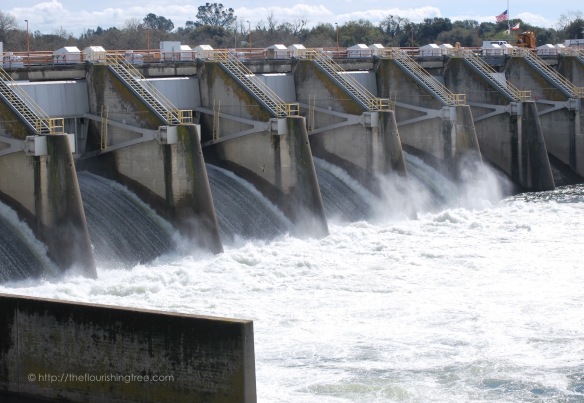 An impressive, welcome sight after the long drought

The last two weekends have brought much-needed rain here, but with the rain came winds that broke trees apart, some already drought-dead but others blossoming out for the season. 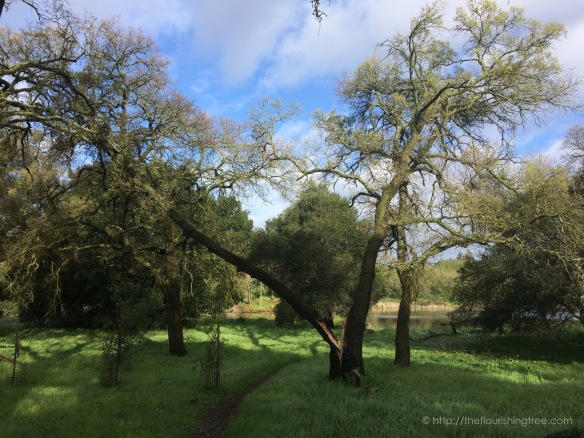 Split apart and resting on two other trees

Fallen across the bike path

Two Sundays ago (before the time changed and I didn’t struggle as much to get up early), I was out before the chainsaws started. I made my way to the river to see it roaring past. It was the highest I’ve seen it.

This week the river is even higher, a raging, rushing combination of rainfall and federal mandates to release water upstream. (We Americans don’t really like to save for a rainy day—or a drought-scorched summer—do we?)

I walked to the river’s edge this morning and stopped to stare. The fishermen are gone. Even the wading birds seem to have disappeared, along with the marshy islands. Trees tremble as the water rushes around them in its haste to get to the ocean.

Gone are the fishermen and the marshy river islets.

We’ve still a long way to go before the drought is over, but it’s unsettling to watch the ceaseless power of the river, full of trees debris speeding by like funeral pyres—not on fire but dead nonetheless.

My thoughts turn toward Louisiana and storms and floods we never see coming until they’re already on us. In the storms, the river will take what it wants, and so will the wind. What we’re left with is a reminder that we can only do so much to control nature, to prepare for storms.

There was a man by the river this morning. He was sitting in a camp chair, his dog resting nearby. He stared out at the river. And I did the same. Sometimes, that’s what you do after the storms. Sit. And stare. And count both the beauty that is lost and the beauty the storms created.

The local news is calling this “Miracle March,” even though there’s little rain in the forecast. The resilience and green and flowers blooming all make it feel a bit of a miracle now that the sun is out. Does March where you are feel like a miracle?

2 thoughts on “After the storms”