The police officer rolled his motorcycle up to look into the car between us as we all sat at the traffic signal. He turned on his mic and said, “Are you serious right now? Are you really talking on your phone with me right next to you?” I couldn’t make out the rest of the conversation, but the driver got a (lengthy) verbal warning about holding his cell phone while driving.

California has a hands-free law and a law against texting while driving, but I have to say, I see an unsettling number of drivers holding phones while talking and texting as they barrel down the road. Some of them look up at the road very seldom.

The incident with the police officer happened about a month ago, but the memory of it surfaced yesterday as I started out for a morning walk with the dog. My daily route involves navigating past a sidewalk that ends.

Many mornings, I stop right at the fence and wait for a break in traffic before I venture out into the road and then back onto the gravel along the side of the road.

Yesterday, a car zipped past with a guy holding his cell phone to his ear. Then, I watched a car drive from the intersection ahead, weaving almost imperceptibly. The woman was older than I am, maybe late fifties. When she got right up to where I could see into her car, she was staring down at her phone texting. I’m not sure she ever saw me.

I watched the rest of the drivers who passed on my side as I walked up to the intersection. Four out of the five—80%!!—were driving distracted in some way. The driver of the car that came past right after Weaving Woman was staring down into his passenger seat. I’m not sure what the next driver was doing or looking at, but both hands were fluttering around her face.

I’m just going to put this out here: I do not want to die on this road (or any other road for that matter). I don’t want anything to happen to my sweet husband or neighbors who walk or run along that road. I do not want my dog to get run over. I don’t want any broken bones or even any near brushes with the cars that come by. I especially don’t want to get hit by a car because someone felt the need to text at the moment: Running L8. On my way.

You’ve probably seen the public service announcements aimed at young drivers to convince them not to text. They’re horrifying, and I’m not going to share any here. (You all know how Google works.)

What I will share here is a plea, a prayer. When you get behind the wheel of your car, please remember:

In case you’re a little rusty on your math symbols, that’s a greater than sign. A life is greater than a text. Probably not the most controversial sentence I’ll ever write, right? And yet, too many drivers do not act like this is true.

If the text is important, find a safe place to pull over so you can respond. Dog walkers, runners with their infants in jogging strollers, that person walking up to the corner store, all of these people deserve your focus and your efforts to keep your car from wrecking them.

I guess drivers forget or don’t consider the vulnerability of those on foot nearby. And for those who are parents of young children, maybe they underestimate the impressionable minds watching from the back seat—and adopting their parents’ actions for their own when they’re at an age that they’re both learning to drive and smarter and better at everything than their dumb, old, out-of-touch parents.

In case this is an area where you are on the guilty side, let me encourage you to print this handy reminder and tape it to your dashboard, or, better yet, make it the wallpaper on your phone. 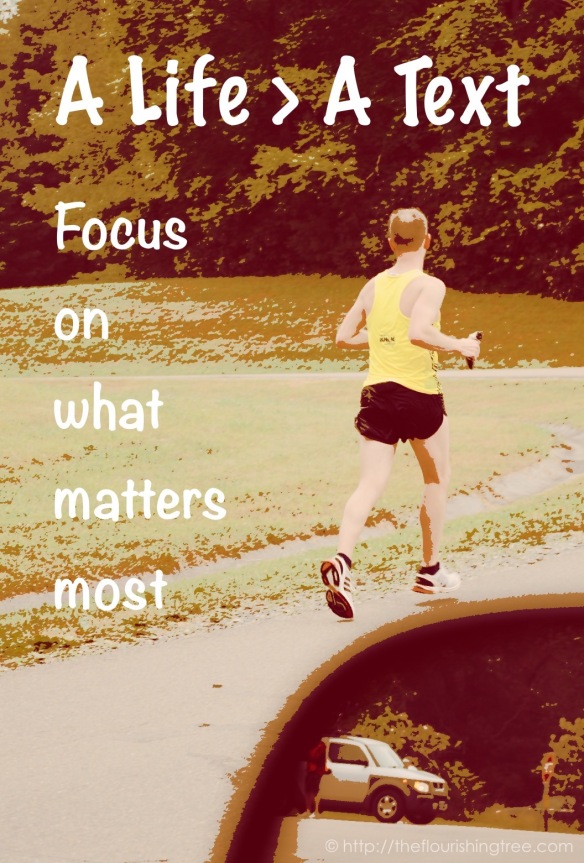 I won’t ask for public confessions here, but do you text and drive? Is a life worth you answering those texts right away? For those of you who have broken the habit, what strategies keep you from looking at your phone every time it pings or rings or buzzes while you’re in the car? I’d love for you to share what has worked for you.

7 thoughts on “Focusing on the road ahead”