I ran a 10K this past weekend on a beautiful day that promised of early Fall. The race is well-organized every year, which means that, among other things, traffic control is well-done and volunteers are out at all turns where runners need directions about which way to go.

The course contains a lollipop section: an out-and-back part (you run the same road going and coming back, which makes the lollipop stick) with a loop at one end. From overhead, the course looks like a lollipop, hence the name.

The “circle” part of the lollipop for this particular race started near the 4-mile mark, where there was also a water stop. There were volunteers handing out water, and another volunteer whose sole job it was to point runners in the correct direction. Runners turned left to start the circle of the lollipop by running down a lovely hill. To leave the circle part, runners came down a gentle hill and turned left again, putting them back on the “stick” part of the course.

I was running back toward the end of the lollipop’s circle, ready to turn left onto the “stick” part of the course. And that’s when all the yelling started.

A runner approaching the water stop for the first time took a cup of water and then turned right instead of left. This put her running against the stream of runners coming back through the turn and meant she was off-course and heading into a needless uphill grind.

“I know it’s fun, but you have to be able to hear!” That’s what the volunteer called out to her as she ran back by him. Who knows whether she heard or heeded his words.

Until the past few years, races’ insurance could be in jeopardy if competitors wore earbuds or headphones, and some race directors went so far as to say they would disqualify runners caught wearing them. But this rule has relaxed recently, and more and more runners wear earbuds during races.

The increased use of earbuds during races is a detriment to our sport, and I wish races would go back to encouraging runners to race without them.

Missing a race’s camaraderie
One of the reasons I love racing is the camaraderie that comes from pounding out mile after mile with other runners. I don’t like to chat while I run, but I do enjoy an occasional pleasantry with another runner, maybe a bit of encouragement after a tough hill or a “You can do it” when my energy flags. With more runners wearing earbuds, the sense of communal effort and support is beginning to dissipate, and I miss it.

Another reason I wish we could go earbud-free at races is for the spectators. I don’t need a group of cheerleaders on my daily runs, but at races, especially long ones or particularly hard ones, it’s nice to have folks cheering on the side of the road and ringing cowbells or whatever other noisemakers are in vogue. (I vote for a cowbell over a vuvuzela any day. Just my two cents’ worth.)

This past spring, my husband pointed out how much less fun it is to cheer for runner after runner who can’t hear the cheers because of earbuds. In the last few races I’ve watched, I’ve noticed this growing phenomenon, too. It discourages me as a spectator. I mean, I could have slept in and could be enjoying coffee and a good book on the porch swing. But I’m trying to support the runners out there. It’s a whole lot more fun when runners come by and acknowledge spectators’ presence with a smile, a wave or a even a call for “More cowbell!”

Many runners who like to wear earbuds and belt out tunes as they run should also know that just because they were born to run doesn’t mean they can (or should try to) sing it like the Boss. Though sometimes being near someone belting out an off-key song does spur me to run faster to get away sooner.

The safety in our hearing
Our sense of hearing is one of the best ways we runners can protect ourselves out on the roads, too, and it’s the safety issue that makes me also long for earbud-free races.

The truth is we are more vulnerable as runners than we like to admit, and being able to hear what’s coming up near us (car, bicycle, angry dog) is one of our best protections. Three years ago, a runner wearing an iPod died after a plane making an emergency landing hit him. I wonder if he could have lived if he had been running without the iPod.

Car back!
It’s common to hear “Car back!” or “Car up!” among runners and cyclists out together on the roadside. It’s a way of helping protect each other.

As I mentioned, the race this past weekend always has great traffic control, but it’s not perfect, and there are cars that end up driving alongside runners at certain points, especially some of the more residential sections of the race. Earlier in the race Saturday, I watched as a runner ahead of me did a 360-degree spin to avoid getting hit by a driver determined not to wait for runners to pass by before pulling into her driveway. What if the runner had been wearing earbuds and not heard the car or the runners near her yelling “Car back!”?

It all makes me think of the verse in Revelation (yes, I know this is wildly out of context). But I say to those of you who run, “Whoever has ears, let them hear.” Hear the cars coming. Hear the volunteers directing you. Hear the spectators cheering for you. Hear the beautiful rhythm of all those feet heading together for the same finish.

This sign sat near the start of the course Saturday. I think another good one might be: “You can run with an iPod tomorrow, when no one is cheering.” But please, leave at least one earbud out. 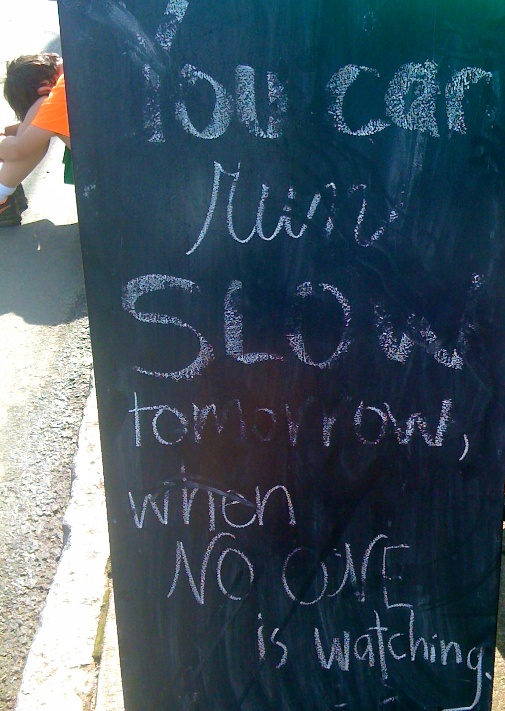 You can run slow tomorrow when no one is watching … I know, Mom, it should say “slowly.”

I add this second sign just for fun and conversation. A little encouragement goes a long way, and most runners I know appreciate fun signs along the course. I admit that this one puzzled me a bit, though:

My first thought when I saw this one: Makes it seem longer in a good way? Or in a bad way?

So I have a few questions for you runners out there. Does running make life seem longer to you? In a good way, I hope? Do you run with earbuds when you’re racing?

For you nonrunners out there, are there times and places where you get so caught up in your own electronic world that you miss the cheerleaders’ encouragement or the cars whizzing by? Are you willing to unplug to hear what you might be missing?