“I grow plants for many reasons: to please my eye or to please my soul, to challenge the elements or to challenge my patience, for novelty or for nostalgia, but mostly for the joy in seeing them grow.” – David Hobson

I was at the hardware store this past weekend and overheard two men talking. One had come across a snake in his garden and was buying something (poison? trap? I didn’t look at what he was holding) to get rid of the snake. The other told him if it was a black snake, then he should leave it alone. He went on to say,”If you ever see a black snake out along the roadside, put him in the car and take him home with you.” Ugh.

I know he speaks some truth. Black snakes are supposedly your best friend when it comes to keeping poisonous snakes away from your yard. I just … well … I just don’t like snakes at all. I know they exist, but I prefer never to see them in my garden or along my running path or even behind glass in a cage at the nature museum.

My husband and I commented again about the two men’s conversation when we saw a large black snake on the other side of the road as we were out driving a few days later. Our dog was in the back of the car, and we envisioned the total chaos that would have ensued had we stopped and tossed the snake in with the dog to take home. I’m not sure who would have fared worse: the snake, our dog, the car or us. Again, ugh.

So I’m glad that I’ve only had pleasant surprises in my garden this past week, and I wanted to share some of them with you. I promise: there are no scary critters involved.

First was a calla lily in bloom. A dear friend of mine carried a bouquet of orange calla lilies at her wedding, and ever since, I associate these flowers with her. As I was planning out a new backyard garden spot a few years ago, I knew I wanted to put in some calla lilies. I have been disappointed each year as the huge, green leaves came up but never any blooms. And then this, as we officially entered summer:

I noticed a spot of yellow from my kitchen window and went running outside to see if my eyes were playing tricks on me.

I guess it’s simple things like this that delight my soul. The bloom has lasted for days now, and others have joined it to add beauty to my orange and yellow garden patch. 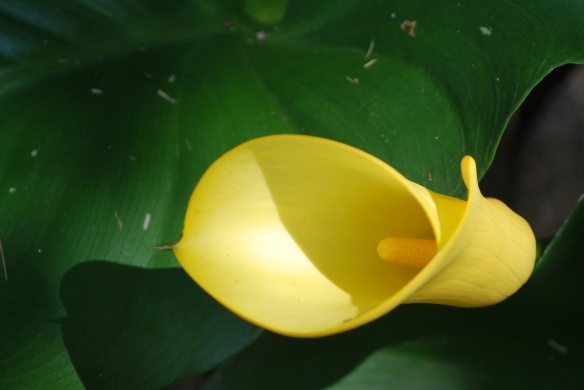 A calla lily bloom heralds the start of summer

The second surprise showed up in my front yard at about the same time. A Lady Baltimore hibiscus (one my longtime readers may remember from a post two summers ago) came up this summer as a double stalk instead of just the single one that has been coming up for several years now.

Finally, I can believe the seller who promised it would branch out someday and become shrublike.

This is the first stalk, growing in about the same place a stalk has come up each of the last few summers.

Here’s the second stalk of the Lady Baltimore hibiscus, with the promise of at least four more blooms for now. I love watching as one bloom fades and another pink blaze emerges from the green pods, one at a time, as if to keep the dazzle going for as long as possible.

The final surprise struck me today, as I watered plants in the front yard. The baby crape myrtle my husband and I planted when we built our first raised garden area several years ago (maybe six years now?) has finally begun looking like a tree.

I don’t know if it’s the wetter-than-usual June we’ve had or the prolonged spring that encouraged it to shoot up, but it’s starting to take its place as a centerpiece of the garden. I’ll post pictures of its red blooms once they’re out. The crape myrtle has always been one of the last in the neighborhood to bloom, but I can already see the promise of the red flowers to come:

The tips of the crape myrtle promise blooms to come. 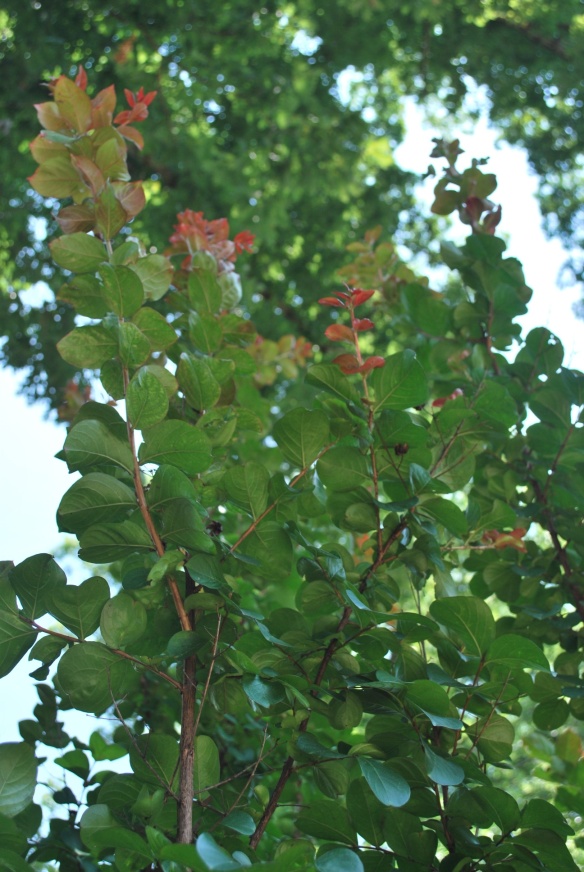 For years, I felt as though I towered over the crape myrtle. Now, it towers over me.

How about your own garden? What surprises, blessings and joys have you discovered in the early days of summer?

6 thoughts on “Surprises in the garden”