“Let us run with endurance the race that is set before us.” Hebrews 12:1c

Many of you already know that I completed my first marathon this past Saturday. I didn’t win (I left that for the East Africans), but I felt victorious when I crossed the finish line. And the whole experience has left me with much to be grateful for: family and friends who prayed for my safety during the race and celebrated with me in various ways before I ran and after I finished; my husband who was such a good sport about dealing with other spectators and traffic jams to cheer me on at various points of the race; and most of all, God’s love and protection and grace for enabling me to finish the race well.

The start was emotional for me. Following the singing of the National Anthem, there was a flyover that pushed me to the brink of tears. And then the “Top Gun” theme song cranked out of the speakers. I knew I needed all the salt I could keep in my body, and so to keep from crying, I started chatting with a woman standing near me in the chute. Our conversation was the perfect distraction and helped settle my emotions and my nerves enough to handle hearing Vangelis’ Chariots of Fire theme song playing as we started our run.

The first 12 miles went by easily and quickly, maybe too quickly. The sun was out and the sky cloudless (not what I had hoped for on a course without much shade), but the view was breathtaking: Lake Superior shimmering and spray flying up off the rocks along the shoreline.

It was a warm, humid morning, and I reminded myself that God had prepared me for the conditions during the early hours of the race by sending me a warmer and more-humid-than-usual spring to train in. The ice that volunteers were handing out at the aid stations helped, too, especially because I was wearing a hat and could dump the ice on my head and let the hat hold it all on while it slowly melted.

By mile 15 (still fairly early, considering how much was left to run), I felt horrible. I don’t know what it feels like to “hit the wall” that everyone talks about in a marathon, and I don’t know if that’s what happened to me, but I certainly didn’t expect to struggle for the next five miles. I didn’t want to quit, exactly, but I was really wiped out both physically and emotionally.

Somewhere during that rough patch, the skies clouded over (for which I thanked God profusely), and a cooling breeze picked up. My friend Shannon claims that breeze was her prayers for me to feel God’s encouraging spirit. Did I mention all those wonderful friends who were actively praying for me that morning or who had given me encouraging words before the race?

Anyway, each mile started getting easier, and the dreaded “hill” at Mile 22 seemed like nothing to me (probably because I was so rested from a lot of walking during 15 to 20). I started enjoying the spectators’ funny signs again (“Your training lasted longer than Kim Kardashian’s marriage” and “If it were easy, we’d be doing it” were two favorites). Other than my husband, my favorite spectators, though silent, consisted of a line of troll dolls along the curb for several yards – an array of the crazy-haired things lined up from largest to smallest watching us all run by.

By mile 25, I was feeling confident again, and after seeing my cheering husband shortly before the finish, I took off, ready for a strong finish. There’s no way to describe the emotions of crossing the finish line in your first marathon. You feel an entire range of everything from exhaustion to relief to exuberance to … oh, please just let me sit down right now.

So I was one happy/relieved/tired tortoise, sitting on a curb eating strawberries and drinking chocolate milk. Because whether you win the race or finish near the end, you still get that finisher’s medal. 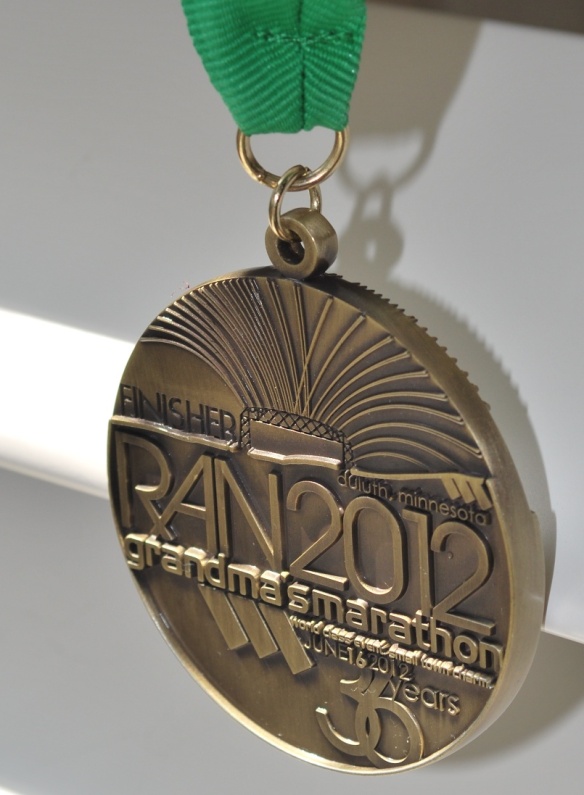 Tortoise and hare approaches to evangelism
After the race, my husband and I started back toward our hotel. It wasn’t far, and so we were walking. Well, he was walking, and I was hobbling. Then it started to rain a cold rain, and I hobbled a little faster.

It was then that we passed an “evangelist” up on a box, yelling and pointing to individuals as we walked by. “You alone have offended God.” He was yelling other things, but that was the phrase that struck me the most.

I’ve always been perplexed by those who feel called to preach anger and hate to passersby, and right then, I wished for more energy to challenge him. “We all have offended God at some point,” I said, mostly to myself. His approach toward winning souls is like the hare’s approach – all about bullying and yelling words as quickly as possible. This style makes me cringe, mostly because I don’t believe it’s an effective way to share God’s truth to others.

Later that night, we attended a small dinner hosted by the magazine Marathon & Beyond. One of the guest speakers was the founder of Team 413, Chris Gillespie. He told us of the verse that had inspired the organization’s name: “I can do all things through Him who strengthens me.” (Philippians 4:13)

He went on to talk about how an injury had sidelined him but that he had experienced a great joy as he cheered runners on at Mile 25 throughout the day. He also spoke of the joy of seeing the number of Team 413 shirts on runners coming by, not screaming their message from a platform but slowly, quietly spreading hope and encouragement to the runners around them. He ended by talking of the enduring joy that comes from knowing God. So much joy.

I was struck by the quiet power of his talk, a message that I consider to be the tortoise approach to evangelism. A message of encouragement instead of condemnation. The lifting of the spirit instead of tearing it down.

There’s so much of this world that tears down the spirit, but the joyful moments help us soar. Perhaps because of my own joy that day, Gillespie’s message seemed the better way to win the race set before us:

Therefore, since we have so great a cloud of witnesses surrounding
us, let us also lay aside every encumbrance and the sin which so
easily entangles us, and let us run with endurance the race that is set
before us, fixing our eyes on Jesus, the author and perfecter of faith,
who for the joy set before Him endured the cross, despising the shame,
and has sat down at the right hand of the throne of God. For consider
Him who has endured such hostility by sinners against Himself, so that
you will not grow weary and lose heart. – Hebrews 12:1-3

6 thoughts on “The tortoise and the hare”