Last Thursday, I came home from my afternoon walk with my dog to find two rabbits hanging out in the yard. Because there’s a bit of Mr. McGregor in my husband and me, and because we don’t want rabbits setting up camp in our yard or eating everything in our garden, I let our dog try to chase them away (with me still holding her by the leash). One bounded away, but the other just ran in circles around a newly-dug rabbit nest. Deciding the rabbit might be a new mother, I took the dog inside and then stood at the front door to watch.

That’s when I saw it – a movement in the grass near the front walk, a dark spot rustling the grass. I feared it might be a snake at first and walked carefully toward the area. Instead of a snake, here’s what I found:

These newborn bunnies weren’t in a nest but instead were just wiggling around together in the yard – right out in the open where the neighborhood hawk or cats or crows or (eek) snakes could easily find them. What was the mother rabbit thinking?

I worried she had abandoned them, but a bit of Internet research assured me that mother rabbits only visit their babies two or three times a day so as not to attract too much attention from predators. The same research also mentioned a survival statistic that told me I shouldn’t hope for too much for these small creatures: only 50% will survive to adulthood.

I wrestled between wanting the bunnies to survive, to enjoy watching them grow, and hoping that if they died, it would be quick and painless and not involve a crow or a cat. I decided it would be best not to name them.

The next morning, all three were still alive, despite a chilly night. But by mid-afternoon, I was pretty sure one had died, and another had wiggled its way a few feet from where they had been born. Maybe the mother would find that one. Maybe it would be the strongest and would survive.

Another chilly night, and the next morning brought proof that only one was still alive – the one that had stayed in the “nest.” I still had hope that it might survive, and my husband marked out the area with a few small branches so that he could avoid it with the mower.

Alas, by Mother’s Day morning, they were all dead. My tender-hearted side battled with the realist in me, and I knew that it was simply Mother Nature being pragmatic. After all, if every baby bunny survived, we’d soon run out of room for them all.

Besides, the rabbit that wouldn’t run from my dog is still building up the nest farther into our yard – filling it with grass and rabbit hair (the mothers apparently pull their own hair to put in the nest) – and it’s a relief to my husband that he will only have one area of the yard with a proper nest to leave unmowed for the next month. 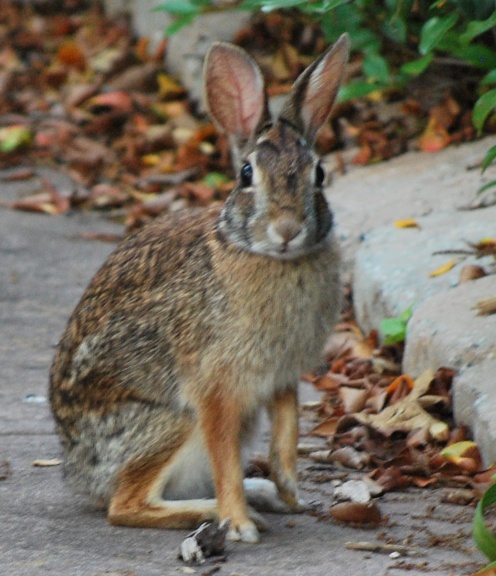 I wonder if the mother of those three rabbits will learn from experience and build an actual nest the next time, and maybe build it in the plentiful bushes around our house instead of leaving the bunnies exposed to the elements. I hope so. I’m not sure how many more bunnies I can stand to see die.

Cruel or kind or pragmatic?
Over the last few days, I’ve tried to decide whether nature is more cruel or kind or simply pragmatic. I realized that there was a lesson in pragmatism for me in all of this. A reminder not to worry, because there is so little that I control.

Christ reminded his disciples of this pragmatism, too:

And He said to His disciples, “For this reason I say to you, do not worry about your life, as to what you will eat; nor for your body, as to what you will put on. For life is more than food, and the body more than clothing. Consider the ravens, for they neither sow nor reap; they have no storeroom nor barn, and yet God feeds them; how much more valuable you are than the birds! And which of you by worrying can add a single hour to his life’s span? If then you cannot do even a very little thing, why do you worry about other matters? Consider the lilies, how they grow: they neither toil nor spin; but I tell you, not even Solomon in all his glory clothed himself like one of these. But if God so clothes the grass in the field, which is alive today and tomorrow is thrown into the furnace, how much more will He clothe you? You men of little faith! And do not seek what you will eat and what you will drink, and do not keep worrying. For all these things the nations of the world eagerly seek; but your Father knows that you need these things. But seek His kingdom, and these things will be added to you. … For where your treasure is, there your heart will be also. – Luke 12:22-31, 34

So here’s what I learned from three bunnies ill-prepared for the world. It is pointless to worry, because God already knows what all of us need. To worry is to tell God we don’t trust Him.

I also learned that sometimes we need to let go of hopes and dreams and even projects that are pinning us down or taking our energy and attention away from the places God would prefer for us to focus. God wants us seeking Him and His will and the treasure of His kingdom, not getting bogged down in cares that aren’t ours to carry in the first place.

Now, if you’ll excuse me, it’s dog-walking time. I hope the rabbit building its nest out front will have the good sense to skedaddle while I’m out with the dog. Even if I am looking forward to seeing some more baby bunnies soon.

How about you?
Are there things or cares of this world that you’re focused on that you should consider setting aside? Is God calling you to focus your energy in a different place? Or on a different dream? I’d love to hear from you.