I did a double-take as I read the first line of the email:

We hope you are holding up well and still getting in your runs during this rainy winter!

I still get emails from race organizers in the southeast, and, at first glance, I expected to read about the weekend’s snow and ice making it hard for runners to get out the door. Winter running can be frustrating where I’m from, especially when ice transforms roads into skating rinks.

But this particular email came from someone here in California, and instead of fretting over icy roads, the concern was all the wonderful rain we’ve gotten. The email’s author organizes hard-core races: races that climb mountains in relentless sun, races where it’s not uncommon to spot tarantulas, races involving trails at a place named for the devil. And he’s worried us being able to train in the rain?

On Friday, as snow and ice coated my home state and wreaked greater havoc farther north, I went for a run in the rain. I was grateful to be here and not back there, where there’s no way I would have run.

Do you know what perplexes me on rainy morning runs here? There’s rarely anyone else out. Many mornings, it’s just my dog and me. If I see anyone out on the trails or the roads, it’s most likely my husband out for his run.

Don’t California runners know the reason runners train in the rain? It’s because you never know when race day will be rainy.

I don’t love running in the rain, but I don’t mind it either (most of the time). And out here, I guess that gives me a competitive edge on rainy race days. Because I’m not very fast, I’ll take whatever advantage I can get.

My husband and I have discovered the only other group of people as unperturbed by the rain: the fisherpeople. (They’re mostly men, but I do see women fishing in the rain, too.) I don’t really understand their willingness to stand in a cold river on a rainy day, but maybe they figure they’re going to get wet anyway. 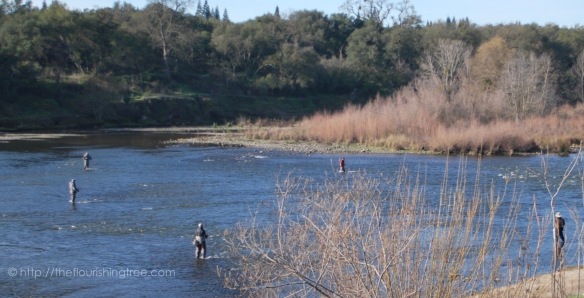 Rain or shine, the river is crowded with fisherpeople this time of year.

My dad, a fisherman extraordinaire, tells me it’s easier to catch fish on a cloudy day because the fish can’t see you as easily. So it makes sense that the fisherpeople come out rain or shine. And maybe they look up at the riverbank, see me running by and think to themselves, “Why would anyone be out running in weather like this?”

If I’m going to be out in the rain, I’d rather run than stand still and fish. And in case you weren’t sure, I’ll take a rainy race over scorching sun and tarantulas any day.

I’d love to hear whether you get out in the rain—to walk the dog, run, fish, or splash in mud puddles. And to all my California friends, help me understand what’s so crazy about being out in the rain.

3 thoughts on “Of runners and fisherpeople”